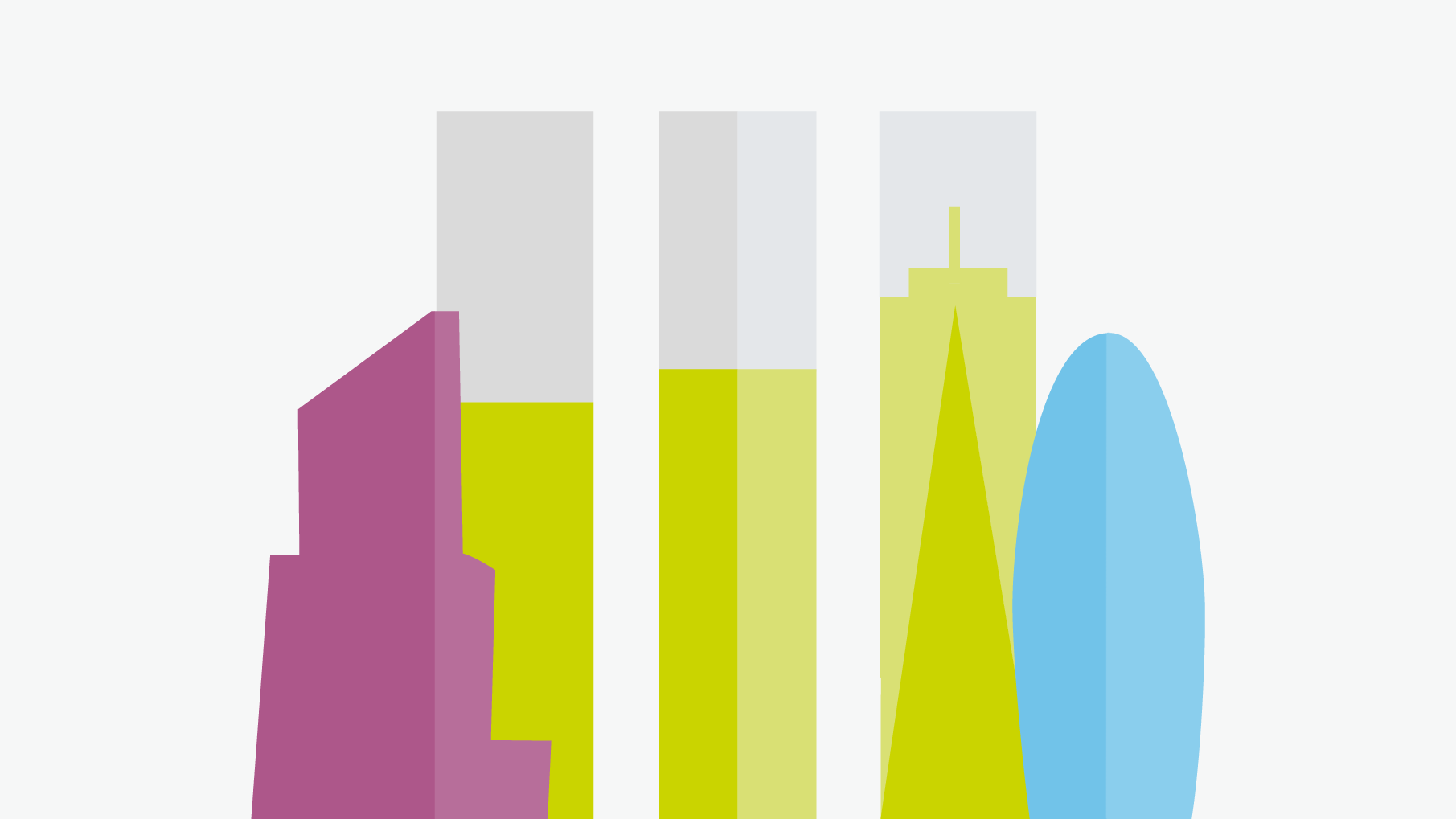 The ‘New Normal’ disrupted old routines and changed the way that we work. We wanted to know how this would impact client engagement, so we ran a comparison across all our data over the past year. 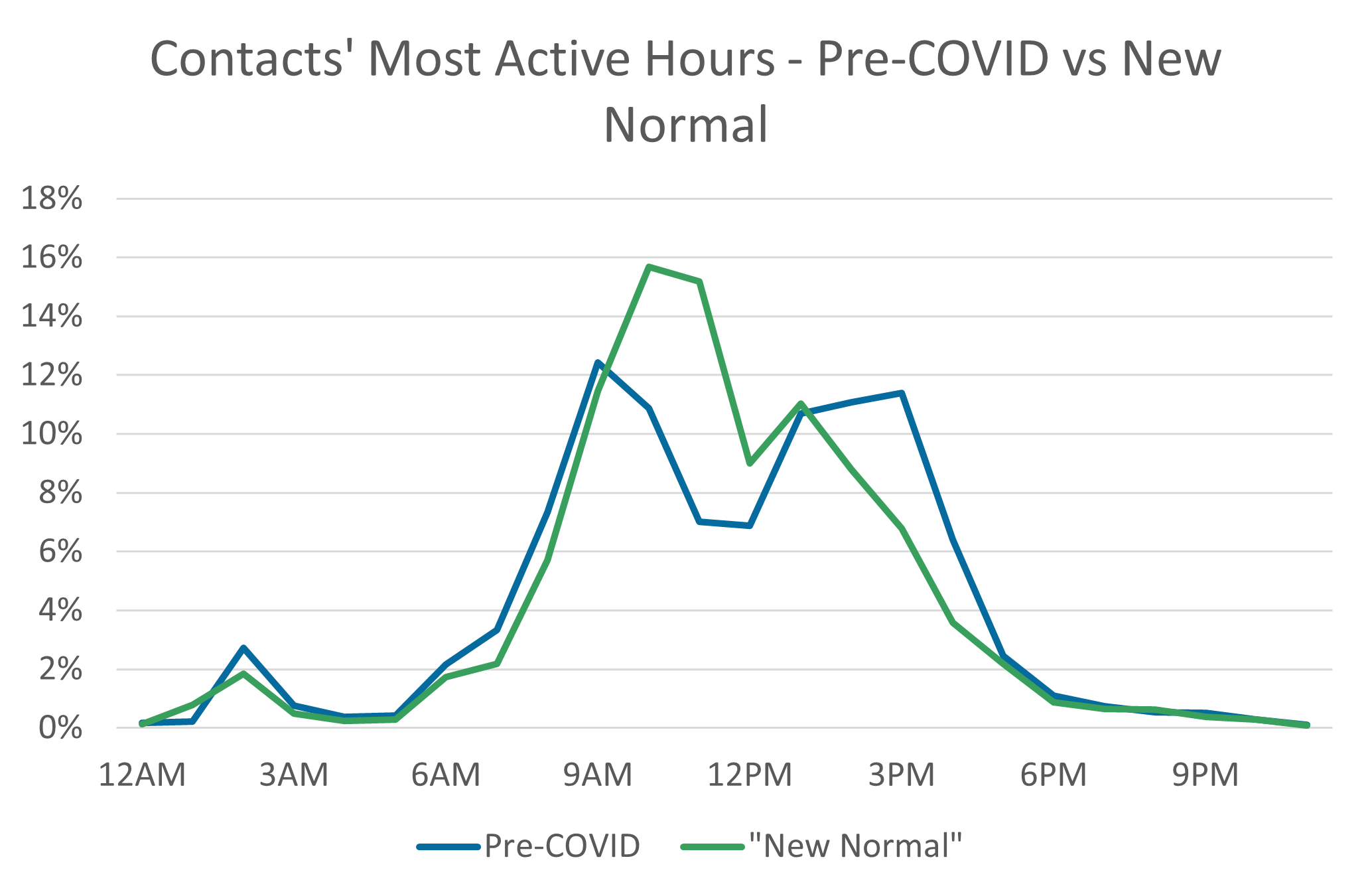 We started by looking at when professional investors are most digitally active. That is, when the most often engage with their emails and fund provider websites. The above figure depicts the contacts’ most active hours pre-COVID (Feb 2019 – Feb 2020) versus the ‘New Normal’ (Apr 2020 – present). It shows that the workday has “shrunk” with a later morning peak (10am versus 9am previously) and an earlier afternoon trough (1pm versus 3-4pm previously). During the ‘New Normal’, more contacts are engaging in the morning and fewer in the afternoon while taking shorter lunch breaks (with the lunchtime dip from 12-1pm versus 11am-1pm previously). 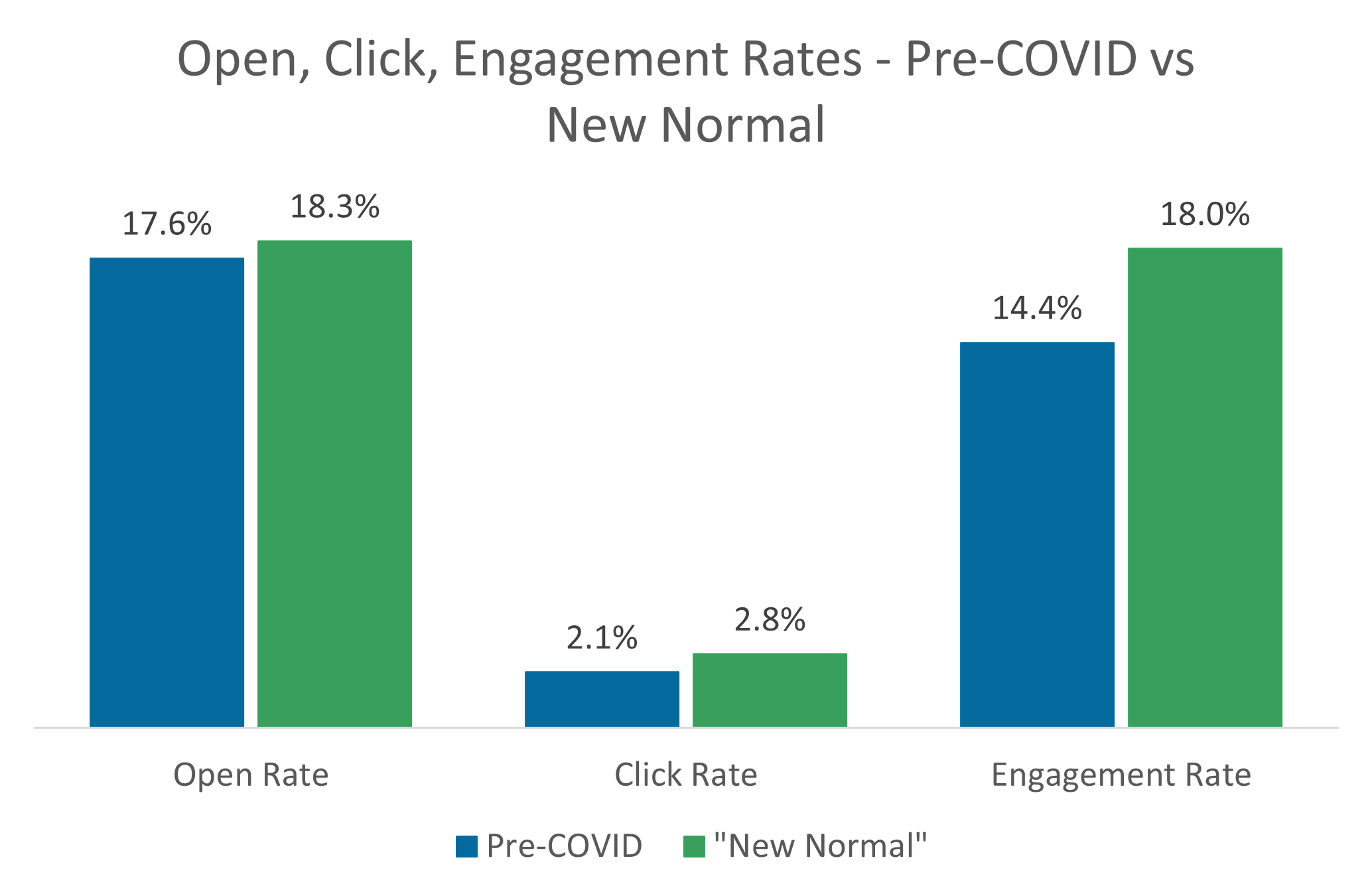 Next, we looked at engagement rate. That’s the percentage of an entire list that’s opening or clicking. For example, if 150 contacts were emailed within a given timeframe and 20 of those contacts had some activity against those emails, the engagement rate = 20/150 at 13.3%.

As we can see from the above figure, open, click, and engagement rates have all increased during the ‘New Normal’. 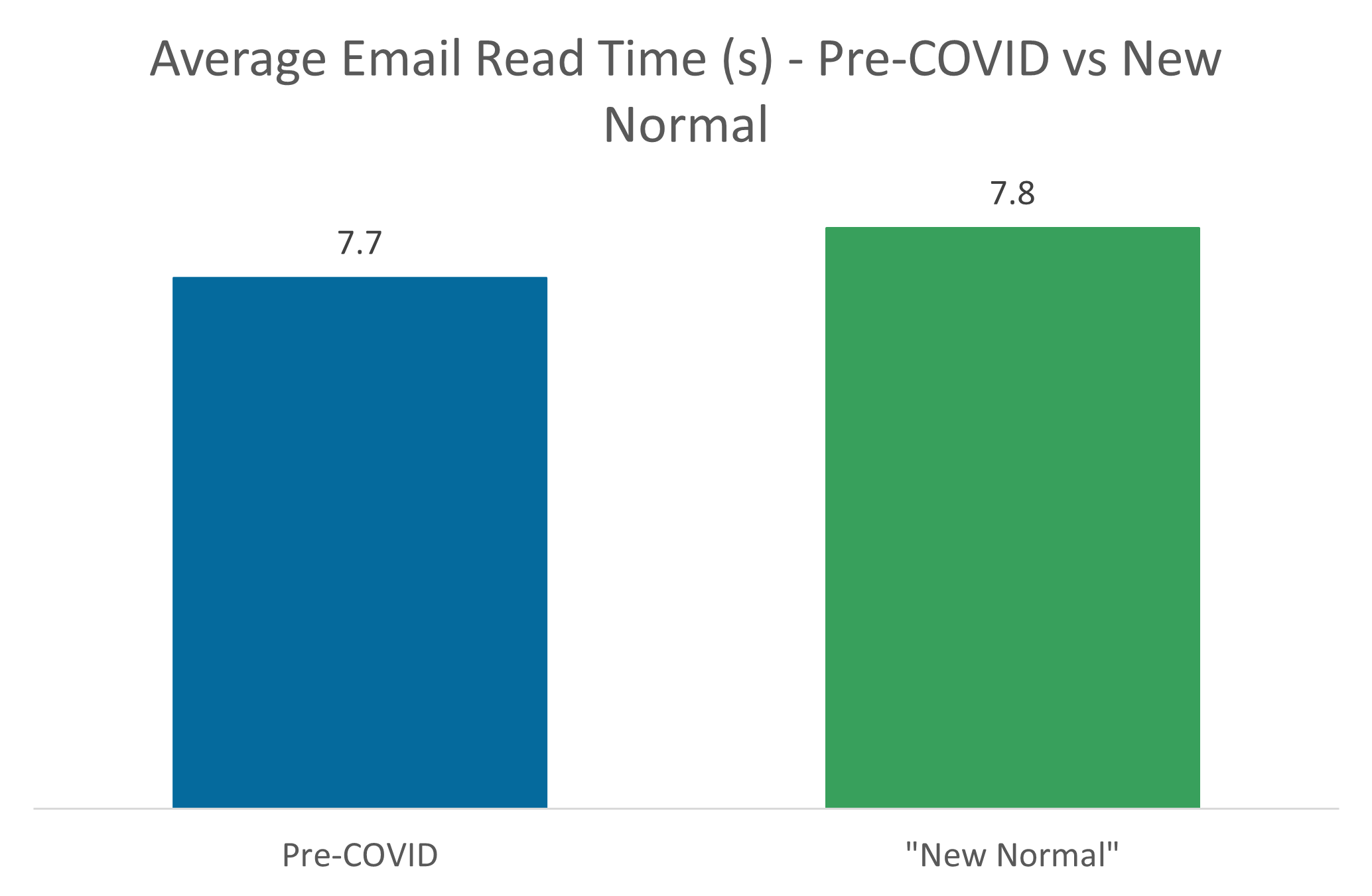 However, when we looked at average read times, we found no significant difference. 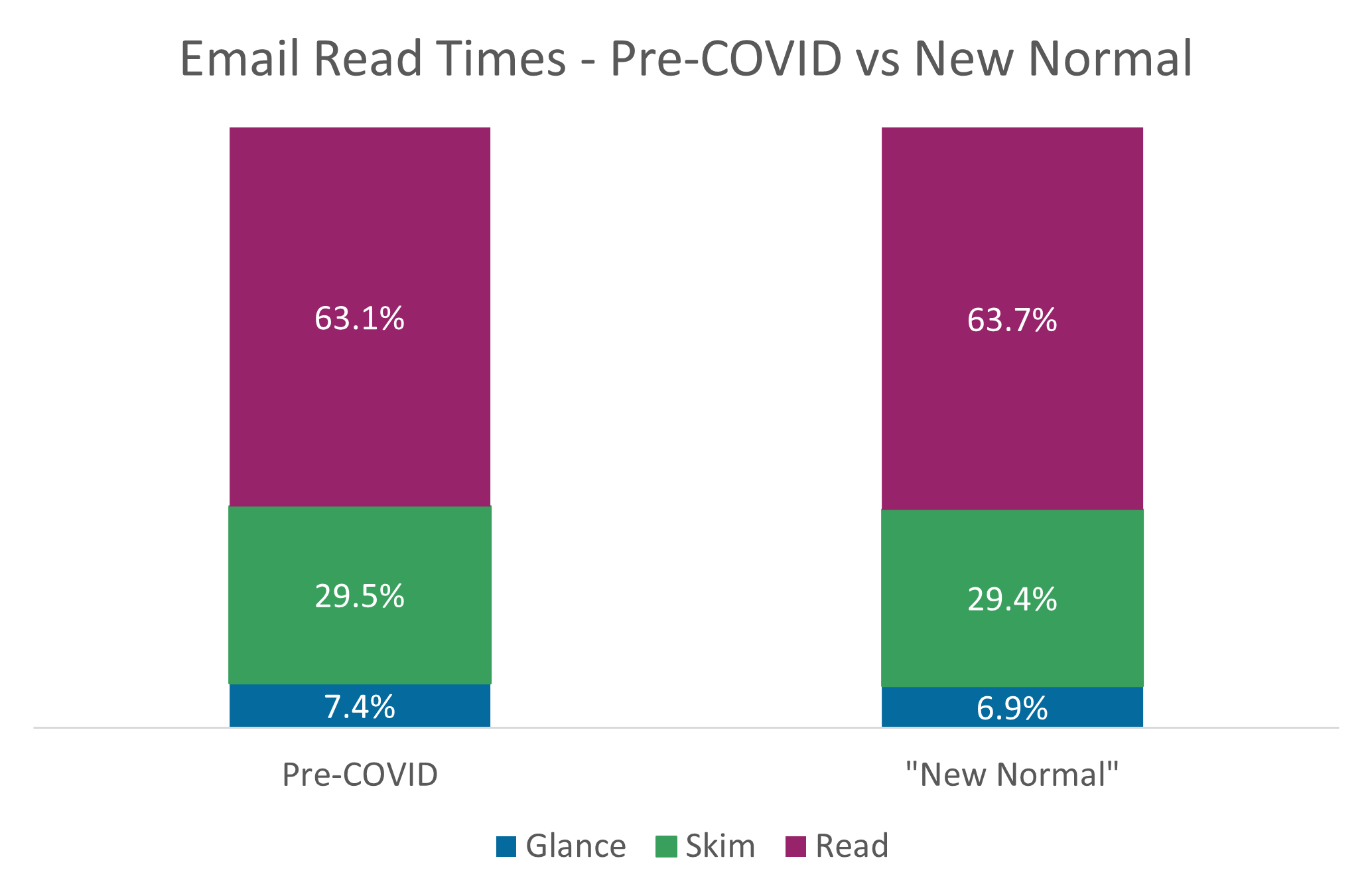 Even when we probed into the details, the glance, skim and read figures show no significant difference in read times with glances at <2s, skims at 2-8s and reads at >8s. 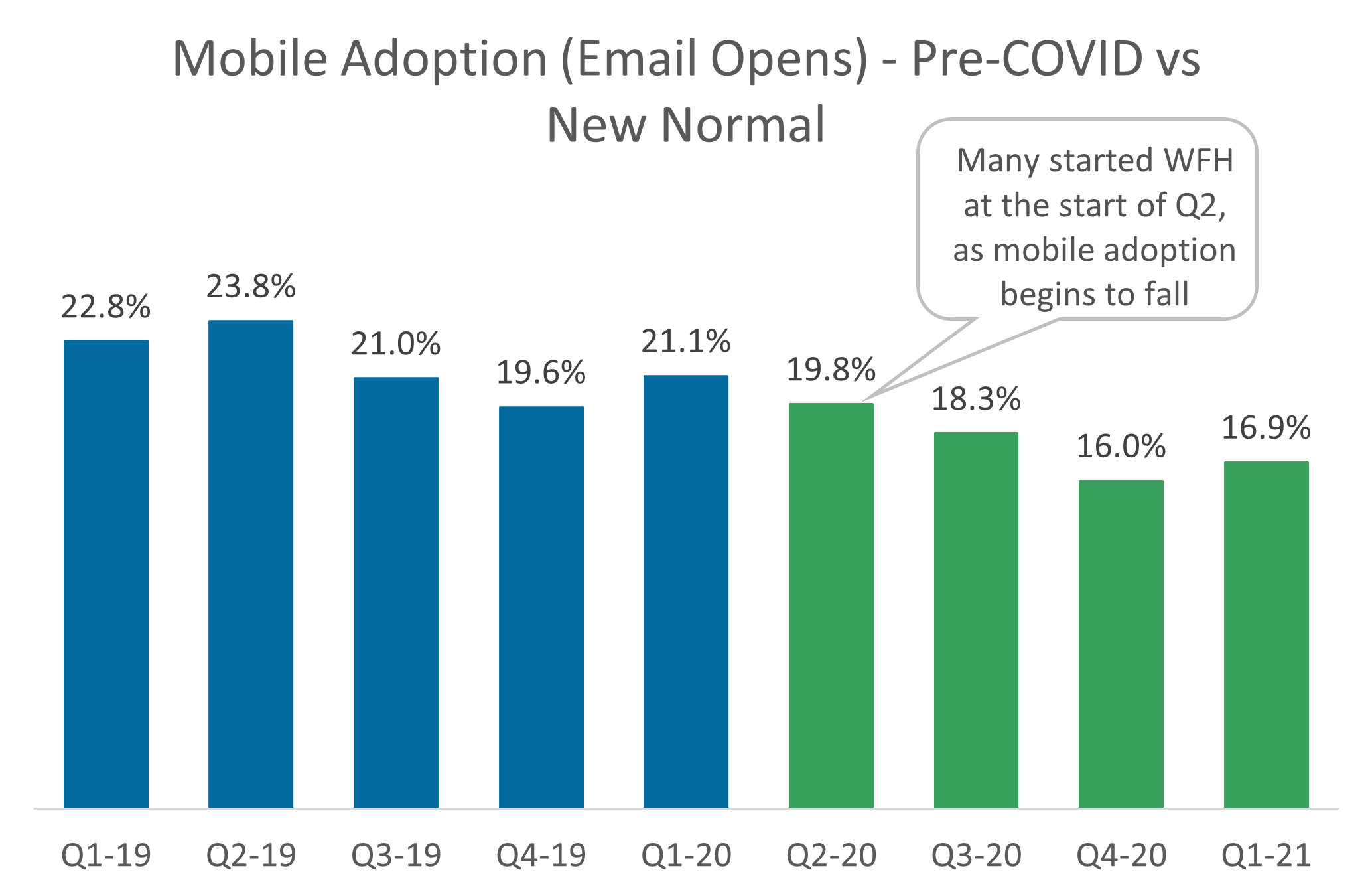 Finally, we wondered what mobile adoption would be like when people are staying local. The above graph confirms that mobile adoption has steadily fallen since many have been working from home. Perhaps, since there is no commuting time, there is less preference for mobile engagement ‘on the go’.

In summary, the working day is now shorter but there’s a deeper engagement with content. And there’s still no “best time” to email professional investors. Where does that leave us?

In the next few months, we will be releasing a new feature called Send Time Optimization (STO) which will help determine the best time to send per contact to increase engagement.

STO is a machine learning algorithm which finds the best time to send emails on a contact-by-contact basis. Since individuals engage with content at different times of the day, we analyzed millions of actions across hundreds of thousands of email addresses to ensure that we’re only sending emails when contacts are known to be active. The best send hour for each email address is calculated based on opens, clicks, read times, and total number of emails received, and is automatically assigned at campaign launch.

When a contact has no recent activity, test emails are sent at different times of the day until we see re-engagement. The algorithm continually learns patterns of behavior by analyzing new data, so it will automatically detect when an individual’s routine changes (say they start working from home and stop reading emails on their morning commute) and adjust the send time accordingly. While STO isn’t new technology, we are implementing it in a unique way by using open and click data across hundreds of financial services firms.

Want to know more about utilizing STO? Leave us a message here and we will get your relationship manager to get in touch with you.

You need to register to access the resources on this site. Hit the arrow and enter your email to get started.

Once Upon a Time: 8 Powerful Email Marketing Storytelling Tips

5
min read
We use cookies on our website to give you the most relevant experience by remembering your preferences and repeat visits. By clicking “Accept All”, you consent to the use of ALL the cookies. However, you may visit "Cookie Settings" to provide a controlled consent.
Cookie SettingsAccept All
Manage consent

This website uses cookies to improve your experience while you navigate through the website. Out of these, the cookies that are categorized as necessary are stored on your browser as they are essential for the working of basic functionalities of the website. We also use third-party cookies that help us analyze and understand how you use this website. These cookies will be stored in your browser only with your consent. You also have the option to opt-out of these cookies. But opting out of some of these cookies may affect your browsing experience.
Necessary Always Enabled
Necessary cookies are absolutely essential for the website to function properly. These cookies ensure basic functionalities and security features of the website, anonymously.
Functional
Functional cookies help to perform certain functionalities like sharing the content of the website on social media platforms, collect feedbacks, and other third-party features.
Performance
Performance cookies are used to understand and analyze the key performance indexes of the website which helps in delivering a better user experience for the visitors.
Analytics
Analytical cookies are used to understand how visitors interact with the website. These cookies help provide information on metrics the number of visitors, bounce rate, traffic source, etc.
Advertisement
Advertisement cookies are used to provide visitors with relevant ads and marketing campaigns. These cookies track visitors across websites and collect information to provide customized ads.
Others
Other uncategorized cookies are those that are being analyzed and have not been classified into a category as yet.
SAVE & ACCEPT
Powered by